From Heraldry of the World
Your site history : Waikato District
Jump to navigation Jump to search 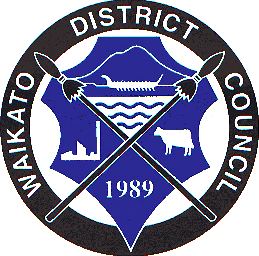 The logo of the Waikato District Council in some way recognises all of the characteristics of the authorities which amalgamated to form it in 1989. It will be seen that it incorporates the detail of the Ngaruawahia Borough arms which has a commonality with much of the District as far as historical matter is concerned, the Huntly Coal Fired Power Station and the rural nature of the Raglan, Waikato and Waipa Counties, particularly the dairying industry for which the Waikato is world famous. The date of the constitution of the Waikato District Council is also included in the logo as are the crossed taiaha representing power and strength.