From Heraldry of the World
Your site history : Waitakere
Jump to navigation Jump to search 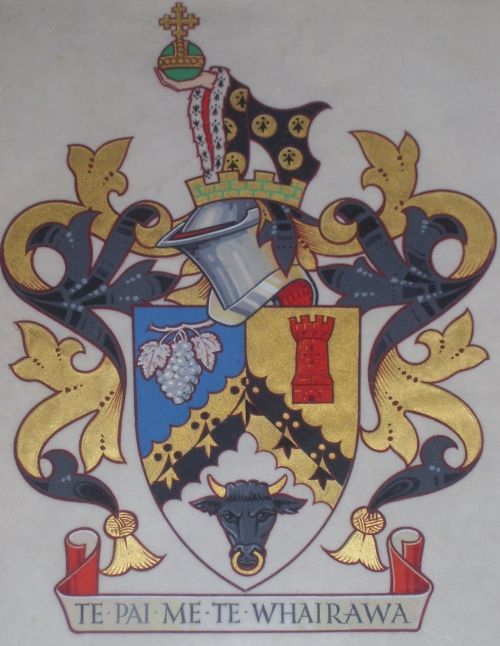 Per pall reserves azure and argent on a chevron engrailed or and sable between in chief a bunch of grapes slipped and leaved argent, and a tower gules and in base a bulls head caboshed sable, armed and ringed of five ermine spots counterchanged, and for the crest on a mural crown or masoned vert, an arm couped bendwise habited in a maunch sable bezanty each bezant charged with an ermine spot sable, cuffed ermine lined gules, the hand proper supporting an orb vert banded and and ensigned with a cross crosslet or, mantled sable doubled or. Motto Te Pai Me Te Whairawa.

The arms were granted on ??

The grapes and thebull's head refer to the importance of viticulture and dairy farming in the municipality. The tower indicates the growth of the city. The gold with black ermine refers to the prosperity and dignity of the city and its council. This is also represented in the crest, especially in the sleeve. The orb is also a symbol for authority.

The motto means 'The goodness and the wealth' and is taken from a well-known saying of the Maori people describing the local conditions.