From Heraldry of the World
Your site history : Wandsworth
Jump to navigation Jump to search 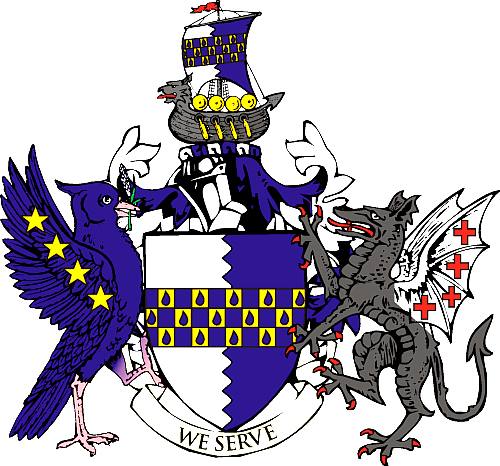 Arms: Per pale indented Argent and Azure a Fess Chequy Azure and Or each of the last charged with a Goutte Azure.
Crest: On a Wreath of the Colours an Ancient Ship at the prow a Dragon's Head Sable four Oars in action and as many Shields Or resting against the bulwarks pennon Flying to the dexter Gules the Sail charged with the Arms of the London Borough of Wandsworth.
Supporters: On the dexter side a Dove wings elevated and addorsed Azure the underside of the wings charged with four Mullets Or in the beak a Sprig of Lavender proper and on the sinister side a Dragon Sable wings elevated and addorsed Argent the underside of the wings charged with four Crosses couped Gules.
Motto: 'WE SERVE'.

The shield contains the main features of the arms of Battersea and Wandsworth. The white and blue indented field comes from Battersea's arms, while the checks and teardrops come from those of Wandsworth. The blue and gold checks are from the arms of the de Warenne Earls of Surrey. This denotes that the area was part of Surrey until 1889. The teardrops represent the Huguenot exiles who came to Wandsworth in 1685. The crest has a dragon ship taken from the old Wandsworth arms. It has four oars and four shields for the four parishes of the Borough - Battersea, Putney, Tooting and Wandsworth. The sail is a banner of the arms.

The dexter supporter is taken from the crest of Battersea. The sprig of Lavender is for Lavender Hill, the main road of Battersea. The dove is charged on the wing with four gold stars, one for each parish. The sinister supporter is a black dragon, derived from the dragon-ship in the crest. The white wings and red crosses are taken from the supporters of the City of London. This shows that Wandsworth is a Greater London Borough. The crosses are four fold again for the four parishes.

The motto is taken from the previous arms. 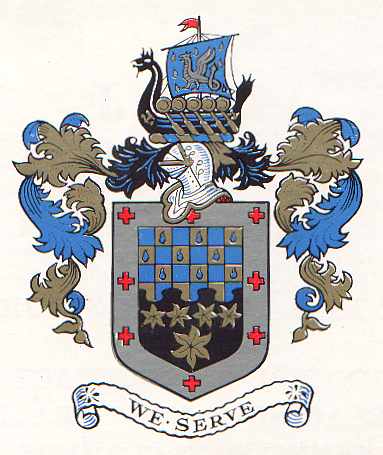 Arms: Per fesse nebuly chequy Azure and Or each of the last charged with a Gutte of the first and Sable in base five Estoiles four and one of the second all within a Bordure Argent charged with eight Crosses couped Gules.
Crest: On a Wreath of the Colours an ancient Ship having a Dragon's Head at the prow Sable five Oars in action the like number of Shields resting against the bulwarks and suspended from the stem and stern an Anchor all Or Mast and Rigging proper with a flag flying to the dexter Gules Sail Azure charged with a Wyvern wings elevated within eight Guttes in orle Argent.
Motto: 'WE SERVE'.

The chequers are from the arms of the Warennes, Earls of Surrey. The blue drops represent the tears of the fugitive Huguenots, many of whom settled in Wandswordth. The stars stand for the five parishes united in the Borouogh. The crosses link the arms with the arms of the city of London. The nebuly party line suggests the rivers Thames and Wandle. The dragon ship recalls the Danish inroads in the 9th century.