From Heraldry of the World
Your site history : Warley
Jump to navigation Jump to search 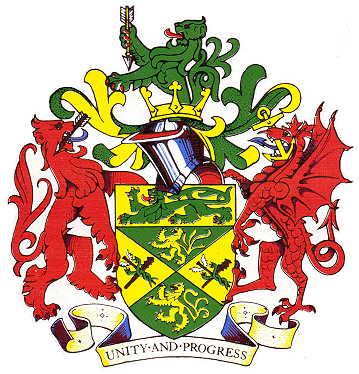 Arms : Per saltire vert and Or, two lions rampant in pale Or, in fess of either flank a club in bend sinister surmounted by a caduceus in bend proper; on a chief Or a lion passant vert.
Crest : Issuant from a Saxon crown Or, a demi lion rampant double queued vert holding with the dexter paw an arrow, barb downwards, proper.
Supporters : On the dexter side a lion gules, in the mouth an arrow proper; on the sinister side a dragon gules, in the mouth an anchor Or.
Motto: Unity and Progress

The crest features a Saxon crown from which rises a green double-tailed lion, emblem of the Suttons, mediaeval lords of Dudley. The lion holds an arrow from tha arms of Matthew Boulton.

The supporters are a red lion and dragon. The lion is from the arms of Sir James Timmins Chance, while the dragon is intended to represent the ancient Britons, founders of the "old burh" or Oldbury. For difference both animals hold objects in their mouths: an arrow (as in the crest) and an anchor (for Cradley Heath's traditional industry).