From Heraldry of the World
Your site history : Heuvelland > Warneton (Hainaut)
Jump to navigation Jump to search 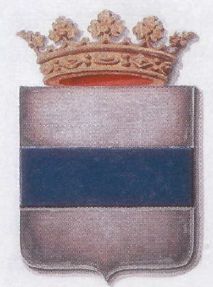 Warneton was first mentioned in the 11th century. The village became in the 12th century a possession of the Lords of Báthune, who owned the town for nearly 2 centuries. The arms of the family showed in silver a red bar, instead of the blue bar in the above arms. The bar appeared on the local seals since 1391. Previously the seal of the town showed a castle. All later seals show the above arms, but official colours are not known. It is likely that the colours were changed in 1819, as often the images and descriptions send to The Hague were not very clear. After the Belgian independence the colours were not changed and the old arms remained in use.

Warneton was in 1713 divided into two parts at the Treaty of Utrecht. The Northern part remained part of Vlaanderen (later it was transferred to Hainaut), the Southern part still is part of France. The municipality of Warneton-Sud uses similar arms, but in the old colours : in silver a red bar.