From Heraldry of the World
Your site history : Watervliet
Jump to navigation Jump to search 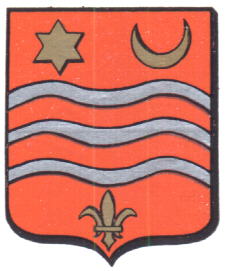 Watervliet was a possession of the Praet family until 1287, when the whole area was flooded and the village was submerged. In 1497 it was started to reclaim the land, which was finished in 1506 by Jeroen Lauweryn, chancellor and treasurer of Philip the Good of Burgundy, Stadholder (governor) of Vlaanderen. The Lauweryn family was granted the newly created estate of Watervliet. The family held the estate until 1719 when it became a possession of the Massiet family.

The arms were created after the estate was established and were also used by the Lauweryn family. The waves symbolise the water, the star and crescent symbolise the night and dark times, the fleur-de-lis symbolises the fertile reclaimed land. The original arms of the family showed a crest with a siren, but these were not granted to the municipality. The arms were continued by the local council after the Lauweryn family had become extict in 1719.