From Heraldry of the World
Your site history : Wealden
Jump to navigation Jump to search 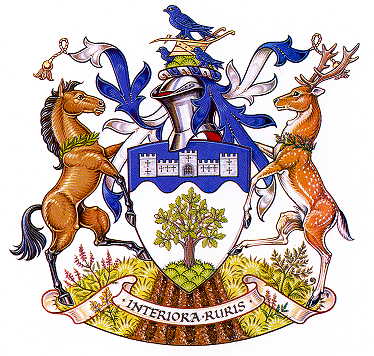 Arms : Argent issuing from a Grassy Mount in base an Oak Tree leaved and fructed proper on a Chief wavy Azure a Castle with two flanking Towers Argent.
Crest : Opon a Grassy Mount proper between two Martlets Azure a Plough Or thereon a Martlet Azure.
Supporters : On the dexter side a Bay Horse gorged with a Chaplet of Ash-Leaves and on the sinister side a Fallow Deer gorged with a Chaplet of Heather (Calluna vulgaris) all proper.
Motto: 'INTERIORA RURIS'

The arms show an oak tree an a grassy mount. This is taken from Uckfield's arms.The blue wavy chief is derived from Hailsham's arms and is charged with a two towered castle, also from the Hailsham shield. The arms can be seen as an heraldic map of the Wealden District, with the inland Uckfield area at the base and the coastal Hailsham area at the top.

The crest simply represents two rural Sussex councils combined in one. This is done by showing two martlets, from the West Sussex County Council arms on a plough.

The dexter supporter is for the cultivated areas and the sinister for the heaths and downs of the district.