From Heraldry of the World
Your site history : Wednesbury
Jump to navigation Jump to search 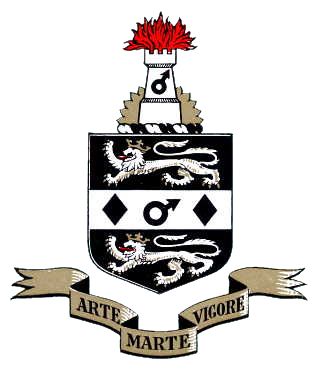 Arms : Sable on a Fess between two Lions passant Argent both crowned Or a Symbol of Mars between two Lozenges Sable.
Crest : On a Wreath of the Colours in front of a rising Sun a Tower with flames issuant from the battlements proper the Tower charged with a Symbol of Mars Sable.
Motto: 'ARTE MARTE VIGORE' - By skill, by iron, by energy.

The arms were officially granted onSeptember 8, 1904.

The field suggests the Black Country and the two lions are from the arms of the Heronville family, to whom the Manor of Wednesbury was granted by Henry II in the 12th century. The black diamonds represent coal mining and the symbol of Mars, used by alchemists to denote iron, represents the iron and steel industries. Mars is also the Roman counterpart of Woden, after whom Wednesbury is named.

The flaming tower is derived from the crest of Joseph Hopkins, a local ironmonger, who left money to the town for charitable purposes. The fiery tower combined with the symbol of Mars can also be seen as representing a blast furnace.

The word "marte" in the motto is also sometimes translated as "by arms" appropriate as gun barrels were formerly made in the town.