From Heraldry of the World
Your site history : Werth
Jump to navigation Jump to search 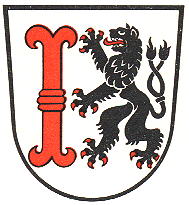 The arms were first were granted in 1840, but in these arms the lion was holding the anchor, see below. As this was not consistent with the old seals, the arms were restored in 1948.