From Heraldry of the World
Your site history : West Bromwich
Jump to navigation Jump to search 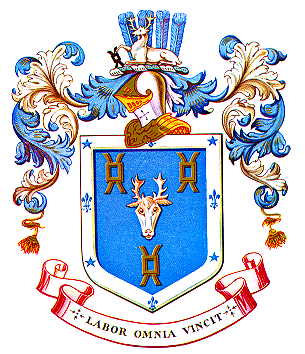 Arms : Azure a Stag's Head caboshed Argent between three Fers-de-Moline Or a Bordure of the second charged with four Mullets and as many Fleurs-de-Lis alternately of the first.
Crest : On a Wreath of the Colours in front of four Feathers erect Azure a Stag lodged Argent supporting with the dexter foot a Fer-de-Moline Sable.
Motto: 'LABOR OMNIA VINCIT' - Work overcomes all things

The millrinds or fers-de-moline represent the iron and brass foundries. The other emblems are are derived from the heraldry of the Earls of Dartmouth, who were formly seated at Sandwell Hall. The motto is not always used.

Literature : Image and information provided by Jim Openshaw and from here