From Heraldry of the World
Your site history : West Midlands
Jump to navigation Jump to search 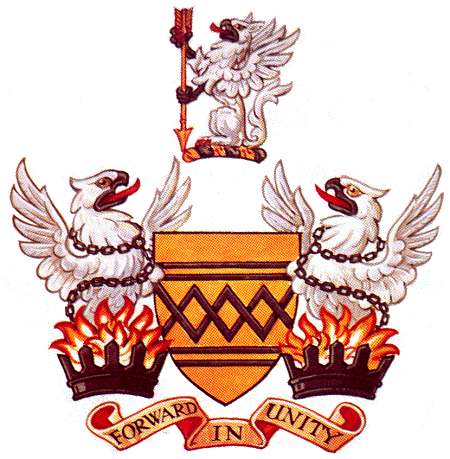 Arms: Or between two bars gemel as many barrulets of three points interlaced sable.
Crest: Upon a helm with a wreath Or and sable a gryphon sejant erect argent beaked and forelegs sable supporting therewith an arrow palewise barb downwards gold.
Supporters: two phoenix argent each rising from flames proper within a crown vallary sable beaked and about the neck a chain pendant reflexed across the breast also sable.
Motto: "Forward in Unity".

The County of West Midlands was created from parts of Warwickshire, Worcestershire and Staffordshire in 1974. It was abolished in 1986.

The gold and black of the shield represent industry. The fretwork across the centre forms the letters "W M" while the bars represent strength.

The supporters, two phoenix, are rising from flames symbolising rebirth and each bird has a chain around its neck which represents the chain-making industry of the West Midlands. A unique feature is the use of basket-like crowns from which the flames issue. Another unique feature is the griffin (which appears in the coat of arms of the Lord Lieutenant and in some of the West Midlands District Councils arms) holding an arrow downwards. The arrow, symbolising movement, refers to the County Council being the Transportation Authority for its area.

The motto is mainly taken from mottoes of the Districts.