From Heraldry of the World
Your site history : Wetherby
Jump to navigation Jump to search 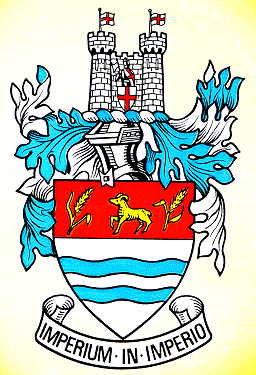 Arms : Argent two Bars wavy Azure on a Chief Gules a Wether passant between two Ears of Wheat slipped and leaved Or.
Crest : On a Wreath of the Colours in front of a Castle with two Towers each surmounted by a Staff proper flying therefrom a Banner Argent charged with a Cross Gules a Knight Templar holding in his dexter hand a Battleaxe also proper.
Motto: 'IMPERIUM IN IMPERIO' - A government within another

The arms were officially granted on January 7, 1938.

The wavy blue bars represent the River Wharfe. The wether refers to the place-name, and together with the ears of wheat, to the agricultural character of the district.

The castle represents the old stronghold whose ruins stood near the Council's offices. It was built by the Knights Templar in the reign of Henry III.

Wetherby had the distinction of being the first Rural District Council to receive a grant of arms.