From Heraldry of the World
Your site history : Whanganui
Jump to navigation Jump to search 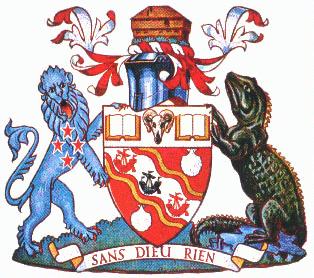 The Rutland Stockade is a reminder that Wanganui was a garrison town from 1846 to 1870, the period during which the British Regiments were stationed in Wanganui.
The ram's head denotes the pastoral industry, a source of wealth to the District.
The books represent Wanganui's reputation as a cultural and educational city.
The silver shells, denoting a pilgrimage, were taken from Lord Petre's Coat of Arms, and here mark the long voyage the early settlers took in 1841 from England, to found Wanganui.
The broad silver wavy band represents the Whanganui River, the pathway used over the centuries by the Maori, and later by the pakeha, to the centre of the North Island.
The gold bands on each side of the silver band represent the wealth created by the many industries centred on Wanganui
The three ships come from the Coat of Arms of William Hogg Watt, the first Mayor, and represents the fleet of ships of Taylor and Watt, which opened up trade from Wanganui to the outside world.
The supporter on the left-hand side is the lion from the Petre Coat of Arms, with the addition of the four stars of the Southern Cross.
The supporter on the right-hand side is New Zealand's native tuatara, and recognises the City's strong links with the Maori people.
The motto is "Sans Dieu Rien", (Without God Nothing) and was the motto of Lord Petre.