From Heraldry of the World
Your site history : Wigan
Jump to navigation Jump to search 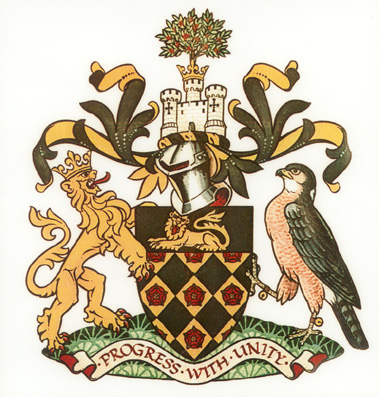 Arms : Lozengy Or and Sable each Lozenge Or charged with a Rose Gules barbed and seeded proper on a Chief Sable a Lion couchant guardant Or.
Crest : On a Wreath of the Colours in front of a Mountain Ash (Wiggin Tree) fructed proper a Castle triple towered Argent the centre tower ensigned by an Ancient Crown Or.
Supporters : On the dexter side a Lion crowned with an Ancient Crown Or and on the sinister side a Sparrowhawk close proper belled Or the whole upon a Compartment representing a Grassy Mount proper.
Motto: 'PROGRESS WITH UNITY'

The arms were officially granted on ??.

The black lozenges allude to coal mining and reflect the arms of Atherton UDC, Golborne UDC and Hindley UDC. The red roses refer to the County of Lancashire, Golborne and Hindley UDCs. The gold lion couchant is taken from the crest of the Borough of Wigan (see below) and features in one of the ancient seals of that borough.

The crowned castle is taken from the shield of the Borough of Wigan, the castle and crown are elements from one of the borough's medieval seals. The mountain ash or Wiggin Tree is chosen as a pun on the name of the district. Branches of this tree are borne by the supporters in the Arms of the Borough of Wigan and the tree features in many of the borough's medieval seals.

The Motto - Progress with Unity, is an apt one for an authority which embraces 14 former districts. 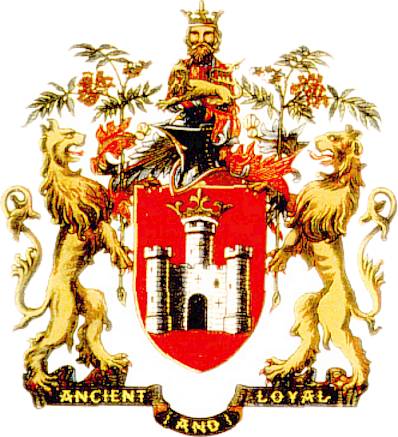 Arms : Gules a Castle with three towers Argent surmounted by a Crown composed of Fleur de Lis Or.
Crest : On a Wreath of the Colours in front of a King's Head affrontee couped below the shoulders proper vested Gules crowned and crined Or a Lion couchant guardant Or.
Supporters : On either side a Lion Or holding in the exterior paw a Branch of Mountain Ash proper.
Motto: 'ANCIENT AND LOYAL'

The arms were officially granted on on April 28, 1922, but were based on earlier seals and devices.

The crowned castle, king's head and couchant lion all come from ancient seals.

The supporters are royal lions, made distinctive by holding branches of the rowan or Wiggin tree, a pun on the town's name.

The motto - ANCIENT AND LOYAL - refers to the antiquity and history of the Borough.