From Heraldry of the World
Your site history : Windecken
Jump to navigation Jump to search 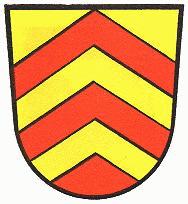 Windecken received city rights in 1288 and the oldest seals date from the same time. The seals already show the above arms, which are identical to the arms of the Counts of Hanau, to whom the city belonged at the time. All later seals and image have shown the same composition, although the number of chevrons has changed during the centuries from three to the 2.5 in the above arms.