From Heraldry of the World
Your site history : Winkel (Oestrich-Winkel)
Jump to navigation Jump to search 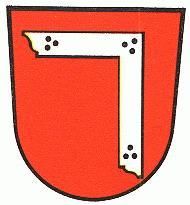 The arms show a straight hook (Winkel in German), which thus is used as a canting element. The hook has been used on the seals and borderstones of the village since the 15th century. The colours are the colours of the State of Mainz, to which the village historically belonged.