From Heraldry of the World
Your site history : Wolverhampton
Jump to navigation Jump to search 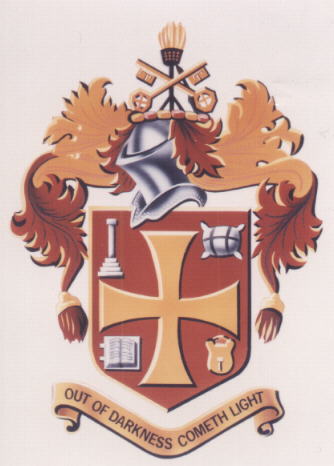 Arms : Gules, a cross formée Or between a pillar in the first quarter, a woolpack in the second , an open book in the third, all argent, and in the fourth a padlock of the second.
Crest : On a wreath of the colours, In front of a beacon sable, fired proper, two keys in saltire, wards upwards, Or.
Motto: Out of darkness cometh light

The arms were officially granted on December 31, 1898.

Wolverhampton was incorporated as a Borough in 1848 and was granted arms in 1898 to celebrate fifty years as a Borough.

Wolverhampton was founded in 985 AD by St. Wulfrun, sister of King Edgar, and she is represented by the cross. Around this are arranged are a woolpack recalling the old woollen trade, a representation of the town's Saxon pillar stone, an open book for the old grammar school and a padlock for the lock industry.

The crest has a black beacon which stands for the Black Country of which Wolverhampton forms part. The crossed keys are the symbol of Saint Peter, patron saint of the town.