From Heraldry of the World
Your site history : Worcestershire
Jump to navigation Jump to search

Incorporated into : 1974 Hereford and Worcester
Re-established in 1998 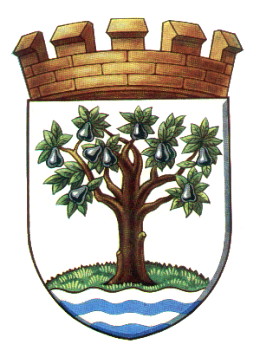 Argent issuant from a Mount on a Base [wavy] barry wavy of four Argent and Azure a Pear Tree proper fructed Sable; the Shield ensigned with a Mural Crown Or.

In 1936 the then Chairman of Worcestershire County Council invited Councillors to subscribe to the cost of obtaining a formal Coat of Arms. Between then and 1940 sufficient funds were in fact raised, but the Second World War caused the matter to be postponed. Eventually the College of Arms granted the Coat of Arms by Letters Patent on 21 May 1947 at a cost of £100. These arms were used until Worcestershire County Council ceased to exist on 31 March 1974

The College of Arms granted approval for the Arms to be re-used in 1997 because the nature and boundaries of the 1998 county are so similar to that which existed before 1974. The Order in Council allowing re-use of the Arms was laid on 23 October 1997.

The arms show a tree bearing black pears. Black pears appear in the arms of the city of Worcester, and as such have long been considered a county badge.

The gold mural crown was included in grants of arms to many County Councils.