From Heraldry of the World
Your site history : Xanten
Jump to navigation Jump to search 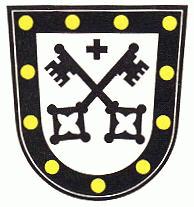 Xanten was an important Roman castellum and received city rights in 1228 by the Archbishop of Köln.

The city has used many different seals, the oldest with St. Peter, the patron saint of Köln, but most with his symbols, the two crossed keys. The two keys appear first in the great seal in 1320. The bordure, which appears in the 16th century has an unknown origin.