From Heraldry of the World
Your site history : Zierolshofen
Jump to navigation Jump to search 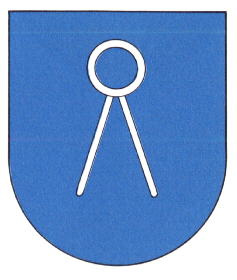 The arms show the local village symbol, a circle with two 'legs'. In 1780 the borders between Zierolshofen and Bodersweier were re-established and marked with new borderstones. These stones showed the village symbols of both villages. In the early 19th century the village had its own seal (known from 1811), which showed the above symbol between two palm leaves. In 1912 the village adopted the above arms in arbitrarily colours.