From Heraldry of the World
Your site history : Zomergem
Jump to navigation Jump to search 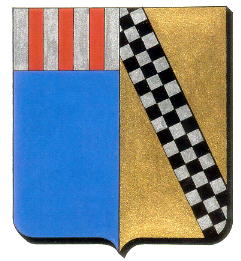 Zomergem and Ronsele were an estate directly governed by the Count of Vlaanderen until 1559. The last Counts of Zomergem were from the Montmorency family, and the only known seal of the village, dating from 1775-1787, shows the arms of Montmorency.

The municipality, however, did not use this seal for its arms in 1987, but used a combination of the arms of the Van Zomergem family and the Adorne family. The Van Zomergem family was a noble family, which probably originated from the area. Their arms showed a blue shield with a silver chief with three red pales. These arms were also proposed as arms for Oostwinkel in the late 1960s, but these were never granted.

The other hals shows the Adorne arms, as the family ruled the village of Ronsele from the laet 14th century until 1699.