From Heraldry of the World
Your site history : Zottegem
Jump to navigation Jump to search

The arms were officially granted on October 9, 1990.

The arms are derived from the oldest Lords of Zottegem in the colours most likely used by this family.

On November 3, 1977 the council applied to be allowed to continue the old arms after the merger with the other municipalities. This was not allowed and much later, in 1984 the Flemish Heraldic Council proposed the use of the old arms, but in historical colours (gold and red) and crowned with the crown as was used by the city in the 17th century.
The local council did not like the change of colours and no arms were granted. 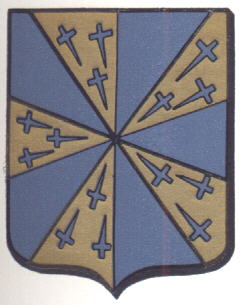 The previous arms were granted on September 2, 1818 and confirmed on April 13, 1838. These arms are derived from the arms of the Lords of d'Enghien (Edingen). Lord Walter van Zottegem dies in 1216 and his daughter Alice marries Zeger van Edingen. Their two sons divide the possessions and Geraad van Edingen inherits Zottegem. He continues the use of the old arms, but to distinguigh the arms from his brother he changed the colours into gold and red. The estate and city of Zottegem continue to use these arms until 1793.

In 1818 the arms were restored, but now in the Dutch national colours. These were confirmed in 1838, but the old colours were not restored.