From Heraldry of the World
Your site history : Leicester
Jump to navigation Jump to search 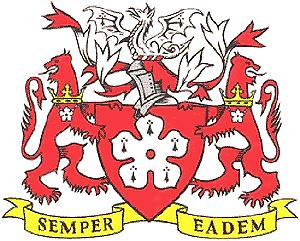 Arms : Gules, a cinquefoil pierced ermine.
Crest : On a wreath of the colours, A wyvern snas legs argent strewed with wounds gules, wings expanded ermine.
Supporters : On either side a lion reguardant gules gorged with a ducal coronet, suspended therefrom by a chain Or a cinquefoil ermine pierced gules.
Motto: 'SEMPER EADEM'

The arms were officially granted on December 2, 1926, but the arms (without supporters) were already recorded at the Visitation on 1619.

The Arms of the City of Leicester of the cinquefoil and wyvern were confimed on the city at the Heraldic Visitation of 1619. The crest is based on earlier motifs of the first Earl of Leicester, Robert De Bellomonte, (the cinquefoil). When the Duke of Lancaster inherited the Earldom of Leicester he held land within the town and hence the Lancastrian connection.

The city status was granted in 1919 and following application by the City Council in 1926 the College of Arms allowed two supporters to be added to the design; the Lancastrian Lions on either side of the cinquefoil and Elizabeth I's motto (translated as Always the same) beneath.