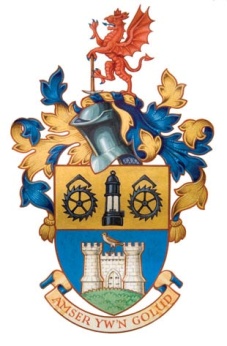 Arms: Per fess Or and azure, in chief a Davy lamp sable, the glass proper, between two horological balance wheels also sable, and issuant from the base a mount vert, thereon a port between two towers argent, perched on the battlements of the port a nightingale also proper.
Crest: On a wreath of the colours, A dragon segreant gules, supporting with the sinister foreclaw and dexter hindclaw a pick, head downwards, proper.
Motto: Amser yw'n golud

The arms were officially granted on November 9, 1951.

The Davy lamp and pick denote mining, formerly the district's main industry, while the balance-wheels allude to the Anglo-Celtic Watch Co. Ltd., founded in 1946, by Smiths Industries Ltd, Ingersoll Ltd and Vickers Armstrong on the Ynyscedwyn estate on the outskirts of Ystradgynlais. The castle is that of Craig-y-Nos, built beside the River Tawe, it was formerly owned by opera singer Adelina Patti, to whom the nightingale refers. The mount alludes to agriculture and the dragon is of course a national emblem.