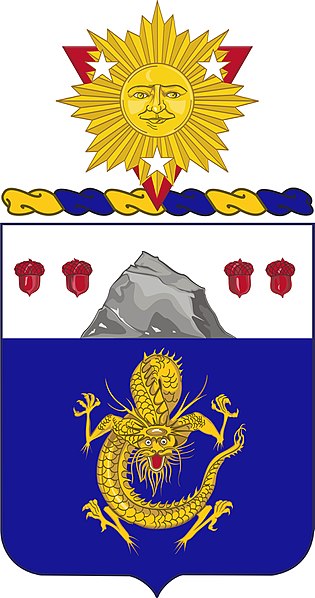 Shield: Azure an imperial Chinese dragon affronté Or, langued Gules, issuant in chief Argent a rock Proper between four acorns stem up in fess of the third.
Crest: On a wreath of the colors Or and Azure, a sun with eight points of rays of the first in front of a triangle resting on one point Gules, in the angles of the triangle
and in front of the sun three five-pointed mullets Argent.
Motto: CAN DO.

The shield is blue and white, the Infantry colors.On the lower part is the Chinese Dragon, and in the white chief the badge of the 14th Corps repeated four times for the four major operations.
Chickamauga where the Regiment fought and held so gallantly is further emphasized by the rock. The crest is the triangle and devices from the Katipunan flag of the Philippine Insurrection.
The motto is the watchword of the Regiment in “Pidgin English” in recollection of the Regiment’s long service in China.
The coat of arms was approved on 1923-04-30. It was amended to correct the blazon of the shield and crest on 1924-07-14.