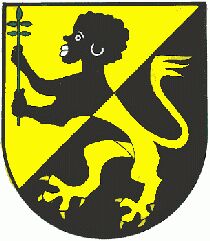 The arms are an indication of the former position of the municipality on different borders and regions. The Moor's head is taken from the Innichen Convent, which belonged to the Diocese of Freising, which has a Moor in it's arms.

The lion's back is taken from the arms of the Counts of Görz, which ruled the area one side of the Abfalterbach-river, whereas the other half belonged to the Diocese of Brixen.

The branch is a canting element for the name Erlenbach, the oldest name of the municipality.