From Heraldry of the World
Your site history : Abingdon
Jump to navigation Jump to search

Incorporated into : 1974 Vale of White Horse 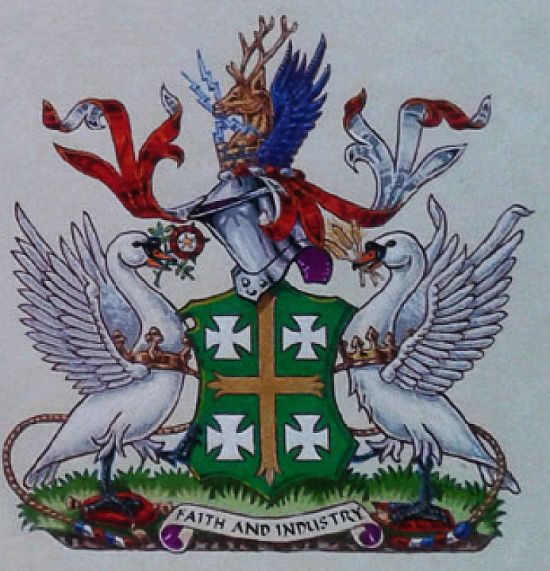 Arms : Vert a Cross patonce Or between four Crosses pattée Argent.
Crest : On a Wreath Argent and Gules out of a Mural Crown Or masoned Azure set between two Wings of the last a Stag's Head Gold in the mouth two Flashes (representing a Nuclear Flash) Argent.
Supporters : On the dexter side a Swan wings elevated and addorsed proper standing on a Woolpack Gules in the beak a Tudor Rose slipped and leaved proper gorged with a Saxon Crown Or attached thereto a Church Bell Rope of the last reflexed over the back the dolley of alternate twists of Gules Argent and Azure and on the sinister side a like Swan standing on a Book bound Gules edged Or in the beak three Stalks of Barley proper gorged with an Ancient Crown Gold attached thereto a Church Bell Rope as on the dexter.
Motto: 'FAITH AND INDUSTRY'

The green background and the four smaller silver crosses are taken from the arms of the Fraternity of the Holy Cross and the large gold cross is from the arms of Abingdon Abbey, which seems itself to have been suggested by the arms attributed to Edward the Confessor.

The mural crown represents local government and the stag's head represents Berkshire (Abingdon's County until 1974). The blue wings represent the Abingdon RAF base (that was, and is now Dalton army barracks) and the blue flashes allude to the nearby atomic energy research centre.

The swans represent the River Thames. The Tudor rose held by the left swan is for Queen Mary who granted Abingdon's first Royal Charter (1556) and the Saxon crown represents the town's saxon ancestry and it stands on a woolpack to show the long sheep farming and wool trading tradition. The barley held by the right swan is for the tradition of malting and brewing. It stands on a book for Abingdon's leather book binding and printing industry. The ropes are for rope making, and its crown comes from the time of Edward the confessor and Abingdon Abbey.

The motto refers to the Abbey and the Church in Abingdon (faith) and industry is for all these aforementioned industires and the more modern ones.

© since 1995, Heraldry of the World, Ralf Hartemink Image and information provided by Laurence Jones (laurencejones@eircom.net)