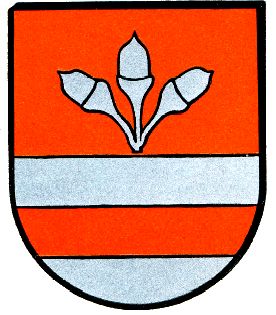 The arms show in the upper half three acorns, symbolising the large oak forests in the Quernheimer Mark area of the municipality. The red bar is taken from the Lords of Quernheim, who were of importance in the local history. The colours are those of the State of Minden, to which the area historically belonged.