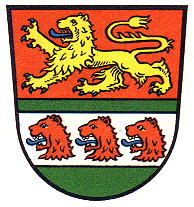 The arms were granted in 1939 and show in the upper half the lion of the Welfen family, Dukes of Hannover, who ruled the area for many centuries. The lower half shows the arms of the Lords of Anderten, known since 1596.