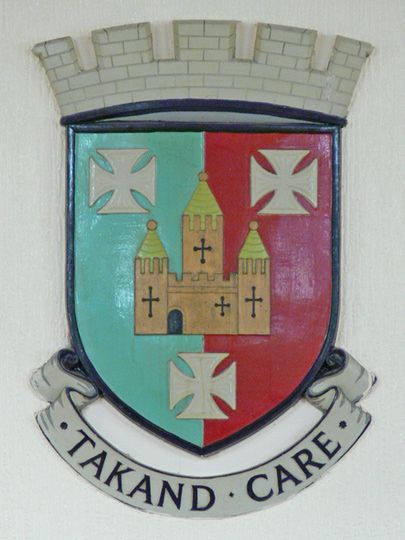 Per pale Azure and Gules, a castle triple-towered Or, windows and ports Sable, the towers capped Vert with balls of the Third, between three crosses patee Argent.

Beneath the Shield which is surmounted of a Burghal coronet Proper is set in an Escrol this Motto "Takand Care".

ARDROSSAN was founded in 1805by Hugh, 12th Earl of Eglinton, who planned to build a harbour there and provide a seaport for the Glasgow trade and connect it by canal to Glasgow.

The arms show the old Castle of Ardrossan which had been shown on the Burgh seal adopted in 1892. The silver crosses and the blue half of the field are for the Bar­clays of Ardrossan who founded the Castle, while the bluefred field and the gold in the castle towers recall the families of Eglinton and Montgomerie to whom it passed by marriage.

Previously the burgh of Androssan used the seal shown below, with a representation of the ruis of Ardrossan Castle, from which the burgh has got its name (Ard=high, ros=promontory), as the castle was built on a high promontory.

© since 1995, Heraldry of the World, Ralf Hartemink Colour image from Ja-Ja postcard; seal from Porteous, 1906.