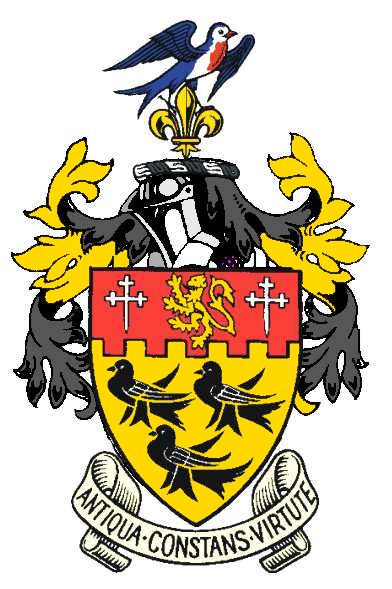 Arms: Or three Martlets Sable on a Chief embattled Gules a Lion rampant of the first between two Cross crosslets fitchée Argent.
Crest: On a Wreath of the Colours upon a Fleur-de-Lys Or a Swallow rising to the sinister proper.
Motto: 'ANTIQUA CONSTANS VIRTUTE' - Steadfast in ancient virtue.

Before this the town used an unofficial device consisting of a white shield bearing a swallow. This is a pun on the town's name, the French hirondelle sounding similar to the town's name. This formed the basis of the crest of the 1939 arms.

The shield itself has three black martlets or heraldic swallows on a silver shield. The colours come from the unofficial arms while the martlets are from the West Sussex arms.
The embattled chief represents Arundel castle. The charges on it are for the Howard family.