From Heraldry of the World
Your site history : Aschendorf-Hümmling
Jump to navigation Jump to search 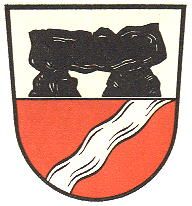 The arms were granted in 1935 by the Prussian Government and changed in 1966.

The arms were devised after the merger of Aschendorf and Hümmling in 1933.
The upper part of the arms show the so called Hunn-beds, stone structures dating from the younger stone-age. These burial monuments are quite common in the area.
The lower part shows the river Ems, which is responsible for the characteristic landscape (moors). The colour of the lower part was taken from the arms of the counts of Ravensberg, who owned much of the area before 1252.

In the second arms only the position of the bar in the lower part was changed.