From Heraldry of the World
Your site history : Bairisch Kölldorf
Jump to navigation Jump to search 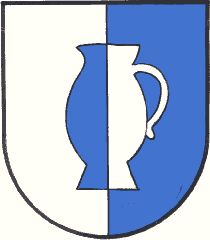 Bairisch Kölldorf is a municipality in Eastern Styria, where there is a long tradition of viniculture. Thus, a wine-jug was chosen as the main charge of the arms. The usual Styrian colours of Green and White were changed to Blue and White with reference to the "Bairisch" in the name of the municipality. This may derive from the home of the original settlers in the Middle Ages in Bayern (Bavaria). The Bavarian colours are blue and white.