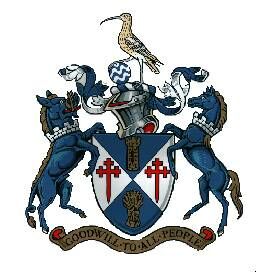 The arms were officially granted on January 16, 1979

The division of the shield per saltire and coloured blue and white, alludes to St. Andrew’s cross, and thereby to Ballymoney’s connection with Scotland. The red crosses are taken from the arms and crest of the MacDonnells and the wheatsheaf refers to agriculture.

The tower represents Ballymoney’s old church tower. The curlew denotes the wildlife in the Ballymoney area and an heraldic fountain represents the Altnahinch Dam and Garry Bog.

The horse features as a supporter to the arms of Lord Macartney, and the boar indicates Ballymoney’s bacon industry.

The mural crowns with which the supporters are gorged refer to the Council’s borough status.

© since 1995, Heraldry of the World, Ralf Hartemink Image and info send by Denis Towner, Australia