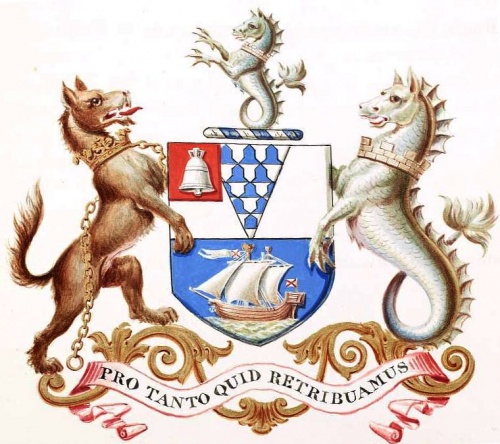 The vair-along with the supporting wolf-is taken from the arms of Sir Arthur Chichester, the founder of Belfast as it exists today, who obtained the city's charter from James I in 1613. The ship tells of Belfast's pre-eminence as a seaport, as do the seahorses, and the bell is canting. The motto means "What return shall we make for so much?", and is a paraphrase of a verse from Psalm 116. The arms were first used on the city's seal, made circa 1640, but were not granted until 1890.

© since 1995, Heraldry of the World, Ralf Hartemink Scott-Giles, C.W. : Civic heraldry of England and Wales, London, 1932 Briggs, G. : Civic and corporate heraldry. Heraldry Today, Ramsbury, 1971 Vinycomb, J. : The seals and armorial insignia of corporate and other towns of Ulster, The Ulster Journal of Archaeology vol. 1, 1894, provided by Z. W. Eisler.