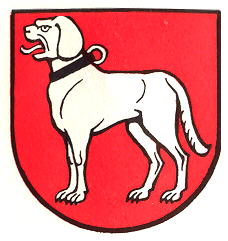 The canting dog (Bracke) already appears on the first seal, which probably dates from the time the city rights were granted (1280). All later seals show a dog. The dog is sometimes shown standing, sitting or running, and since the 16th century the dog wears a collar. The oldest known coloured image dates from 1509. The arms were formally granted in the present composition in 1953.