From Heraldry of the World
Your site history : Buckinghamshire
Jump to navigation Jump to search 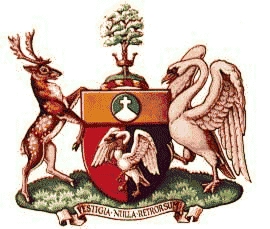 Arms : Per pale Gules and Sable a Swan rousant proper ducally gorged with Chain reflexed over the back Or on a Chief of the last a Roundel per chevron a Cross at the point Vert and Argent.
Crest : On a Wreath of the Colours on a Mount a Beech Tree eradicated proper enfiled with a Saxon Crown Or.
Supporters : On the dexter side a Stag and on the sinister side a Swan rousant both proper.
Motto: 'VESTIGIA NULLA RETRORSUM' - No retreat

The shield shows a swan, having a Duke's coronet round his neck, to which is attached a heavy gold chain. This swan was a badge of the ancient family of De Bohn, and of the Giffards who were Earls of Buckingham, and then of the Staffords who were the first Dukes of Buckingham. These two last-named families owned the important castle at Buckingham.

There is only one conspicuous prehistoric feature in the County, Whiteleaf Cross, which has been introduced on the shield. No tradition attaches to it, but it is a cross of the form known as the Latin Cross, which is intimately bound up with Christianity. It may be conjectured that it commemorates some early victory of Christian over Pagan forces. It is shown on the upper part of the shield, on a green ground, suggesting the setting of grass which is the background of the cross as we see it on the hill.

The buck supporter makes a punning allusion to the name of the County; but the animal has no connection with the name Buckingham, which is derived from that of a Saxon family. The swan is a free wild swan, such as may be seen on the Thames; he is free from the restraint of the gold coronet and chain.

The motto, 'Vestigia nulla retrorsum', which means 'No retreat' or 'We never go backward', is derived from and is still the motto of the Earl of Buckinghamshire.

The crest shows a beech tree. The beeches of the Chiltern Hills are perhaps the best known feature of the County, the beech woods of which are famous. The crown surrounding the trunk of the tree is a distinctively Saxon crown, and alludes to the fact that it was the Saxons who were the first settlers in the greater part of the county.

Literature : Image and information provided by the council