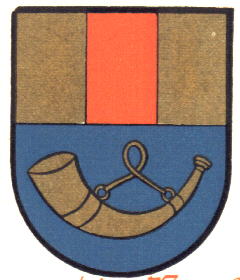 The arms of Burgholdinghausen were granted on May 17, 1939.

The upper part shows a red pale in gold, taken from the arms of the Lords of Holdinghausen, who ruled the village as vassals of the Deutz Abbey from the 13th-17th century. The lower part shows a horn, the symbol of the Amt Ferndorf, to which the municipality belonged.