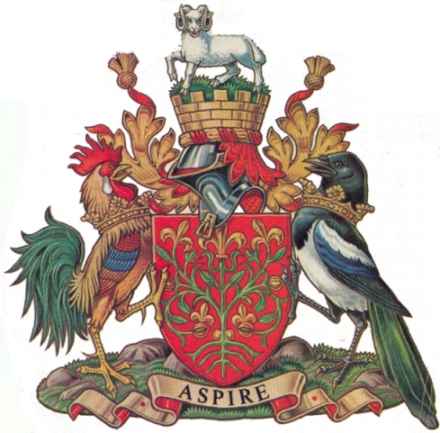 Arms : Gules a Device representing a Pomegranate Tree as depicted on the ancient Common Seal of the Borough the tree leaved and eradicated proper flowered and fructed Or.
Crest : On a Wreath of the Colours issuant from a Mural Crown Gules masoned Or a Mount Vert thereon a Derby Ram passant guardant proper.
Supporters : On the dexter side a Cock and on the sinister side a Pynot or Magpie proper each ducally crowned Or.
Motto: 'ASPIRE'

The arms were officially granted on November 10, 1955.

The mural crown is a common symbol of civic government and the ram links the arms with the County.

The supporters each with a ducal crown commemorate the Revolution plot of 1688 at the Cock and Pynot Inn (now the Revolution House) at Old Whittington and the association of the Earl of Devonshire and other with that plot. The supporters are depicted on a base representing the rocks and moorland around the Town. The motto is both encouraging and refers to the famous "crooked spire" of the Parish Church.