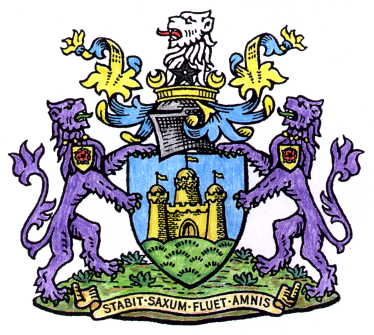 Arms : Azure on a Mount in base Vert a Castle of three domed Towers each flying a Pennon Or.
Crest : Issuant from a Coronet composed of two Crescents Or and as many pierced Mullets Sable set alternately upon a Rim Gold a Lion's Head erased Argent. Mantled Azure doubled Or.
Supporters : On either side a Lion Purpure gorged with a Chain pendent therefrom an Escutcheon Or charged with a Rose Gules barbed and seeded proper.
Motto: 'STABIT SAXUM FLUET AMNIS' - The rock will remain and the river will flow

The arms were officially granted on February 20, 1952.

The castle, representing the old fortress built on a limestone rock beside the River Ribble, has long been used as an emblem by the town. The castle in the arms follows very closely the desicription of the old Corporation Seal of the Borough.

The purple lions are taken from the arms of the de Lacy family, who built the Castle and from whom the town received a charter. The red roses denote the de Lacy connection as Earls of Lincoln with the House of Lancaster and are a general emblem of the Lancashire County.

The motto reflects the derivation of the name "Clitheroe" from the Celtic "Cled-dwr" - the hill or rock by the water - to which the Saxon "How" - hill - has been added.

The arms are continued by the town council