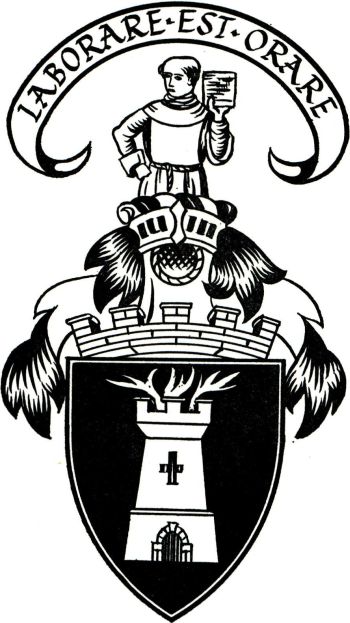 Sable, a tower Argent, masoned of the First, window and port Gules, from the battlements flames issuant Proper.

Above the Shield is placed a Burghal coronet and a Helmet befitting their degree, with a Mantling Sable doubled Argent, and on a Wreath of their Liveries is set for Crest a demi-monk habited Proper, holding on his sinister shoulder a stone also Proper, and in an• Escrol over the same this Motto "Laborare Est Orare".

The arms were officially granted on December 2, 1930.

Coatbridge became a burgh in 1885.

The arms, which incorporate some features from the seal adopted by the Burgh in 1892, have a black field and on it a flaming tower to represent a blast furnace, and thus the iron and steel industry.

The crest of the monk with the stone recalls Monkland, the ancient barony and parish in which Coatbridge lies, and the legend of the "Aul' Kirk Stane". This relates that the first Christian church in the area was built by a monk who, as a penance, had been ordered to carry on his shoulder a heavy stone until an angel told him where to lay it down; on that spot he was to build a church and that is how Old Monkland Church came into being.

The Latin motto-"To work is to pray"-is a phrase from the writings of St. Benedict, which became specially connected with the Cistercian Order. Its use here is appro­priate, as the lands of Monkland were once owned by the Cistercian Abbey of New­ battle in East Lothian.