Additions : 1976 the Burgh of Stornoway and the Districts of Barra, Harris, Lewis, North Uist. 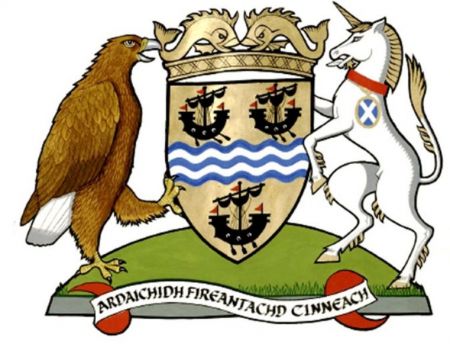 Above the Shield is placed a coronet appropriate to a statutory Islands Area, videlicet:- a circlet richly chased, from which are issuant four dolphins two and two respectant naiant embowed (two visible) Or; and on a Compartment below the Shield, with this Motto "Ardaichidh Fireantachd Cinneach", are set for Supporters, dexter, a golden eagle Proper, and sinister, a unicorn Argent, armed, maned and unguled Or, and gorged with a collar Gules, from which is pendant an oval badge Azure, fimbriated Or, charged with a saltire Argent; and for Badge a lymphad, sail furled, oars in action, surmounting a circlet Sable.

The three black galleys are taken from the old arms of the Lordship of the Isles. The wavy bar refers to the sea. The motto is in Gaelic and means "Righteousness exalteth a nation" and is taken from Proverbs 14:34.

The eagle supporter is a typical bird in the area, the unicorn is a common element in all Islands Councils.