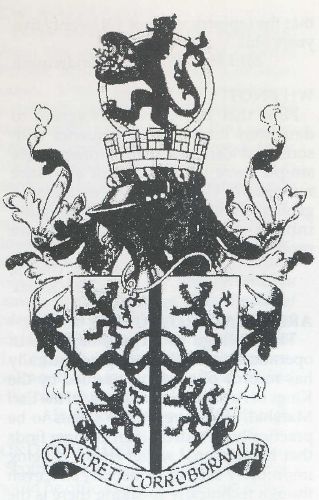 Arms : Quarterly per fess wavy Or and argent, an annulet between four lions rampant gules; over all a fesse wavy sable surmounted by a pale sable.
Crest: On a wreath argent and gules, Out of a mural crown and in front of an annulet Or, a lion rampant gules holding between the forepaws a snowflake azure.
Motto: Concreti corroboramur

The arms were officially granted on September 5, 1967.

The shield shows a union of four quarters, Gold representing fine and coarse aggregate and Argent representing cement. The wavy fess suggests water and the black pale, reinforcement. The red annulet is for the association of the elements of the Society and the lions a symbol, of strength. The four quarters also symbolise the four bodies that came together in the Society.

In the crest the mural crown is an emblem of building and architecture and the circle issuing from it and the lion repeat the symbolism of the shield while the snow flake brings in a personal touch, standing as it does for Sir Frederick Snow's part in the formation of the society.

The motto Concreti Corroboramur means 'Having come together we are strengthened'.