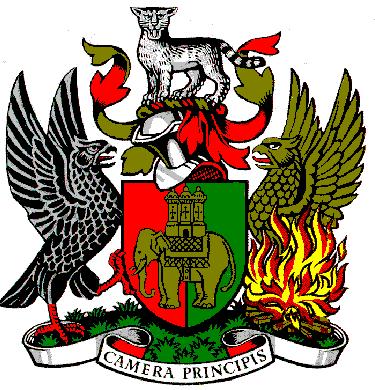 Arms : Per pale gules and vert, an elephant statant bearing on his back a Castle triple-towered and domed or.
Crest : A cat statant guardant proper.
Supporters : On the dexter side an Eagle, wings elevated and addorsed sable, langued and legged gules and on the sinister side a Phoenix, wings elevated and addorsed or langued gules, the Flames proper.
Motto :"Camera Principis".

The arms were granted according to history by King Edward III in 1345. The present arms are identical to the old arms, with the addition of the supporters, and were granted on February 10, 1959.

The elephant is seen, not only as a beast so strong that he can carry a tower - Coventry's castle - full of armed men, but also as a symbol of Christ's redemption of the human race. The elephant is also seen as a dragon slayer in Medieval thinking. There is a now forgotten tradition of dragon-slaying in this neighbourhood - and Coventry to be the birthplace of St. George, who slew the dragon. In the early seals of Coventry, from which the arms are derived, are shown, on one side, the combat between another dragon-slayer, the Archangel Michael, and the dragon. On the other is the elephant and castle. The shield is coloured red and green, the traditional colours of the city dating back at least to 1441.

The crest, a cat-a-mountain, or wild cat, is generally considered to symbolise watchfulness. The helmet is that of an esquire with the visor closed, as with all boroughs. The crest may have been suggested by the numbers of wild cats which once inhabited the Forest of Arden.

The motto "Camera Principis" (the Prince's Chamber) is held to refer to Edward, the Black Prince. The Manor of Cheylesmore at Coventry was at one time owned by his grandmother, Queen Isabella, and eventually passed to him.