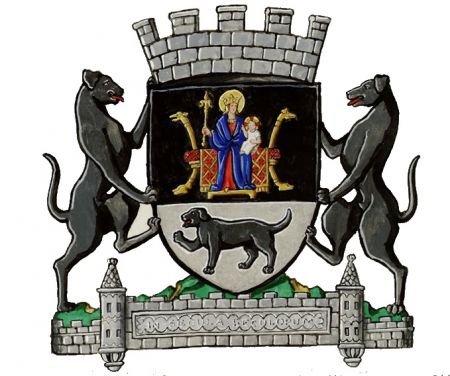 Per fess Sable and Argent: in chief, on a sedilla Or, cushioned Gules, diapered Or, the Blessed Virgin enthroned Proper, habited Gules, mantled Azure, crowned Or, and holding in her dexter hand a sceptre surmounted of a fleur-de-lys Or, and in her sinister arm the Holy Child enhaloed, also Proper; in base a talbot passant of the First.

Below the Shield, which is en­ signed with the Burghal coronet, is placed a Compartment suitable to a Burgh Royal, bearing this Motto "In Secula Seculorum", upon which are set for Supporters two talbots Sable

Cullen seems to have been made a Royal Burgh between 1189 and 1198 by King William the Lion.

The arms are a slight rearrangement of the device on the Burgh seal, of which a seventeenth-century impression is on record. The black and silver colours allude to Sinclair of Deskford, the early adjacent family.
The Virgin and Child recall that the thirteenth-century parish church is dedicated to St. Mary, while the gold and red colours in the faldstool refer to the Burgh's long-standing connection with the Ogilvy family, now represented by the Earl of Seafield, whose seat is Cullen House.

The reason for the dog or whelp in base is not certain but it is commonly thought to be a play on the word "Cullen" as the Gaelic "cuilean" means "whelp".

The Latin motto means "For ever and ever".