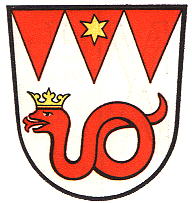 The arms already date from the late 15th century, as the oldest known seal (made between 1460 and 1499) already shows the present arms. The origin of the arms is not known, although the snake may be derived from a local legend. The legend states that the village was founded by a Duke of Schwaben, who, early in the morning, cleared the valley of thousands of snakes.

In the late 19th century the local seal showed a horseshoe under a star, but not in a shield. The present arms are again in use since around 1900 and were officially granted in 1955.