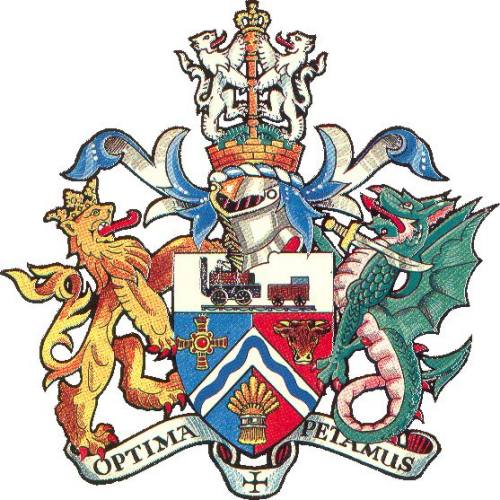 Arms : Per pale Azure and Gules on a Chevron Argent between in chief a representation of St. Cuthbert's Cross proper and a Shorthorn Bull's Head caboshed and in base a Garb Or enfiled by a Circlet of Steel proper a Chevronel wavy Azure on a Chief Argent a representation of the Steam Engine "Locomotion" and a Tender proper.
Crest : On a Wreath of the Colours on a Mount Vert issuing from a Mural Crown Or two Lions rampant combatant Argent supporting between them with the forelegs a Civic Mace Or.
Supporters : On the dexter a Lion crowned with a Crest Coronet Or on the sinister a Wyvern sejant severing the neck a Falchion proper hilt and pommel Or.
Motto: 'OPTIMA PETAMUS' - Let us seek the best

The arms were officially granted in 1974.

The arms contain most of the components from the old councils' arms.
The blue and red colours of the field come from the arms of the Borough and Rural District respectively. Saint Cuthbert's cross recalls the legend of the monks of Lindisfarne, fleeing the Vikings. They brought the relics of Saint Cuthbert with them, and on the spot where the body lay Saint Cuthbert's church was built.

Darlington is a market town, hence the inclusion of a garb and a bull's head. The bull represents "Comet", a famous shorthorn bull bred by the pioneering Colling brothers. The chevron with blue wave shows the River Tees which flows through the district. The chief shows "Locomotion", the first locomotive of the first passenger railway in the World, The Stockton and Darlington.

The crest is identical to that granted to the old Borough in 1960, except for the addition of a mural crown and grassy mount. The two white lions are from from the arms of the See (and County) of Durham, supporting a civic mace, thus showing a County Durham Borough.

In 1967 Darlington celebrated the centenary of its incorporation, and Queen Elizabeth II granted supporters during a visit to the town. In the 1974 arms, the same supporters were granted, but swapped to opposite sides of the shield.

The dexter supporter is a gold crowned English lion, commemorating the Queen's visit. The sinister supporter is a wyvern, with his neck being severed by a falchion. This refers to the legend of the Sockburn Worm, a local dragon slain by Sir John Conyers. The manor of Sockburn was granted to the Conyers family, by William I in reward for this brave deed. When a new Bishop of Durham is appointed, the Lord of Sockburn must present him with the Conyers falchion or sword at Croft Bridge. The bishop hands the sword back for the protection of the manor.

The motto, originally that of the Rural District Council, is OPTIMA PETAMUS, or "Let us seek the best". 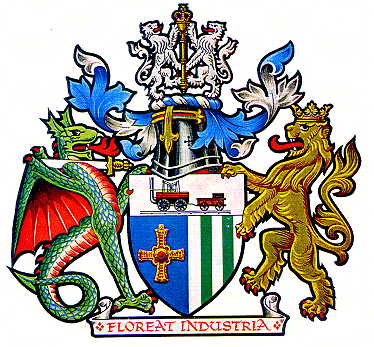 Arms : Per pale Azure and Argent to the dexter a representation of St. Cuthbert's Cross proper and to the sinister two Pallets vert on a Chief also Argent a representation of the Steam Engine "Locomotion" and Tender also proper.
Crest : On a Wreath of the Colours two Lions combatant Argent supporting between them with the forlegs a Civic Mace Or.
Supporters : On the dexter side a Wyvern sejant severing the neck a Falchion proper and on the sinister side a Lion crowned Or.
Motto: 'FLOREAT INDUSTRIA' - May industry flourish

The steam engine recalls the Stockton and Darlington Railway's first steam engine "Locomotion", which dates from 1825. The St. Cuthbert's cross commemorates the legend of the monks of Lindisfarne fleeing the Danish invaders, who carried with them the body of the Saint and eventually came to Darlington. On the spot where the body lay an early Saxon Church was built, hence the dedication of the parish church. The mace is a symbol of civic government and the two lions are derived from the arms of the See of Durham and hence link also with the arms of the Durham County Council .

The supporters commemorate the visit to the town of HM Queen Elizabeth II and HRH Prince Philip, Duke of Edinburgh on 19th October 1967, the lion being a royal emblem. The wyvern refers to the legend of the slaying of the "Sockburn Worm" by Sir John Conyers. The Manor of Sockburn lies a few miles south east of Darlington, on the River Tees. The estates were granted to the Conyers family by the King soon after the Norman Conquest, in recognition of the brave deed. A condition attached to the gift is that the first time a new Bishop of Durham enters the diocese he must be presented with the falchion as he crosses Croft Bridge.