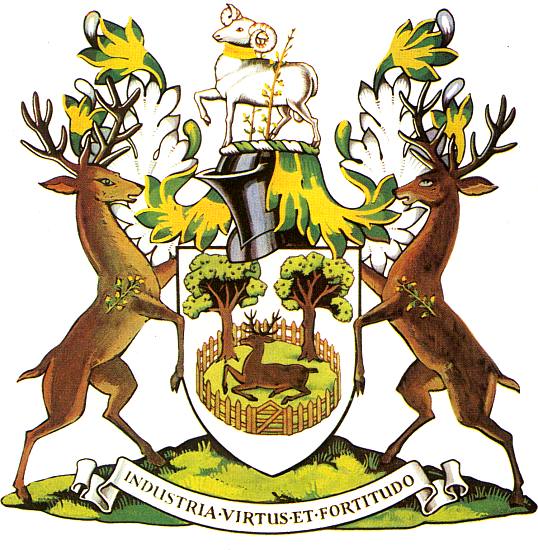 Arms : Argent on a Mount Vert within Park Palings a Buck lodged between two Oak Trees fructed proper.
Crest : On a Wreath of the Colours a Ram passant proper collared Or between two Sprigs of Broom also proper.
Supporters : On either side a Buck charged on the shoulder with a Sprig of Broom proper.
Motto: 'INDUSTRIA VIRTUS ET FORTITUDO'-Diligence, courage and strength

Derby's arms are said to have been granted in 1378 and confirmed 1637. They were regranted on May 12, 1939 with the addition of a crest and supporters.

The shield shows what has long been the emblem of Derby, a buck within the palings of a park.

The crest is a Derby ram, between two sprigs of broom. This was the badge of the Plantagenet kings, who granted Derby's first charter.

The supporters are two bucks derived from the arms. They are differenced by sprigs of broom.