From Heraldry of the World
Your site history : Derbyshire > File:Derbyshi.jpg > Devon
Jump to navigation Jump to search 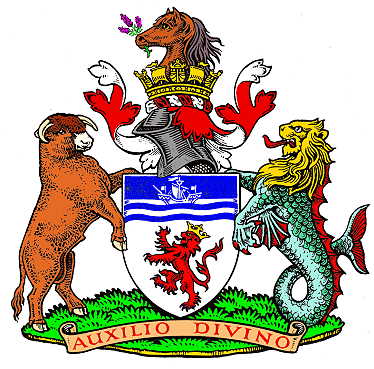 Arms : Argent a Lion rampant Gules crowned Or on a Chief wavy per fesse Azure and barry wavy of the first and fourth an ancient Ship Argent.
Crest : On a Wreath Argent and Gules out of a Naval Coronet Or a Dartmoor Pony's Head in the mouth a Sprig of Heather proper.
Supporters : On the dexter side a Devon Bull and on the sinister side a Sea Lion both proper.
Motto: 'AUXILIO DIVINO' - By divine aid

The arms were officially granted on October 11, 1926. Crest and supporters granted 6th March 1962.

The red lion is that of Richard, Earl of Cornwall and King of the Romans. The crown denotes royal descent. The chief illustrates the maritime heritage of the County, in particular Sir Francis Drake's ship, The Golden Hind.In 1962 a crest and supporters were added. The crest has a Naval crown for the long association of the Royal Navy with Devon. From this rises a pony's head. This represents Dartmoor, where wild ponies still roam.

The dexter supporter is a bull for agriculture and the sinister a sealion for the sea. Thus both the inland and coastal communities of Devon are shown.

The motto was that used by Sir Francis Drake and means By Divine Aid.