From Heraldry of the World
Your site history : Dhuy
Jump to navigation Jump to search 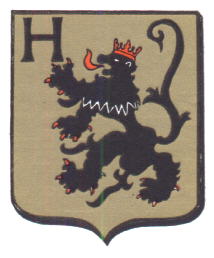 The arms are granted by mistake. In 1819 Dhuy applied for arms with the lion of Namur, based on the old seal from 1422. The Dutch College of Arms, however, granted the arms to Huy instead of Dhuy and added the letter H, to distinguish the arms from the arms of Namur. After the Belgian independence, the arms were granted to Dhuy, but still with the letter H.

Huy and Dhuy thus officially were granted the same arms from 1838-1977, but Huy never used the arms officially granted in 1819.